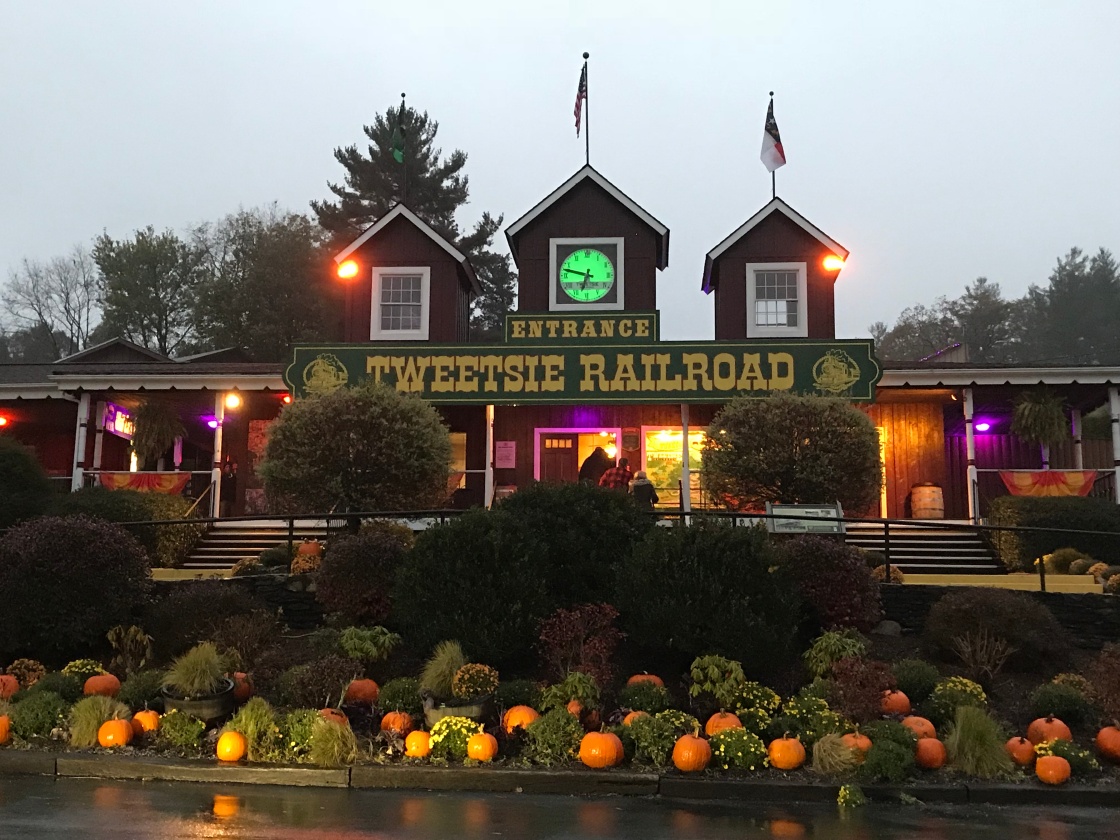 Tweetsie Railroad Ghost Train: The most fun I had this Halloween!

It was a cold, wet and miserable Friday night in North Carolina during October. The kind of night when you just want to curl up on the sofa with a hot chocolate and a good book. But for me it is the perfect night to celebrate Halloween!!

I LOVE Halloween. It is my favourite holiday. Ever.

This year I am spending Halloween in America as I am living and studying in North Carolina. In a previous story I talked about my trip to Scarowinds and how disappointing that was. Now I will tell you about my favourite experience of Halloween.

Located between Boone and Blowing Rock in North Carolina is the Western themed Tweetsie Railroad. During the month of October the park transforms for Halloween featuring a Haunted House, Haunted Forest, Black Hole, 3D Maze, carnival rides, dancers, a puppet show under UV lights, trick or treat stations and the train transforms into a Ghost Train.

You have to book a time to ride the Ghost Train with slots every half an hour. Best to book well in advance if you want an early time slot. I booked the week-of and had to take a 10.30pm time slot.

This worked out perfectly though as we had time to enjoy the park uninterrupted before our ride. When I say “we”, I convinced my friend Ashley Lyalls to come along so I had a ride! There is no public transport to Tweetsie. You can see Ashley in the picture of us together below.

Gates opened at 7pm and we went directly to the Haunted House. In doing so we were rewarded as the second group to enter. Each group went inside alone making it easy to manoeuvre and for the actors to scare more individuals. Walking through it was obvious a lot of thought had gone into the interior of the house, it was very well done. The characters blended into the surroundings and when they moved it was completely unexpected and therefore scary. I was entertained by my friend being scared every time we turned a corner. The actors definitely know who to target, they left me alone. We had to duck and weave props then go through a claustrophobic tunnel. This tunnel was like two giant air balloons pushing together and you had to force your way through. This was the only time the house had me rethinking my choice to enter. I do not like small dark spaces. Walking through this Haunted House you never knew who was a mannequin or a real person. The final area featured a real person being electrocuted with his arms bound. The twist came after he was electrocuted when he jumps out at you, leaving his (fake) arms attached to the wall. It was so much fun! One piece of advice – never go through a good Haunted House a second time, it is never as good the second time around. 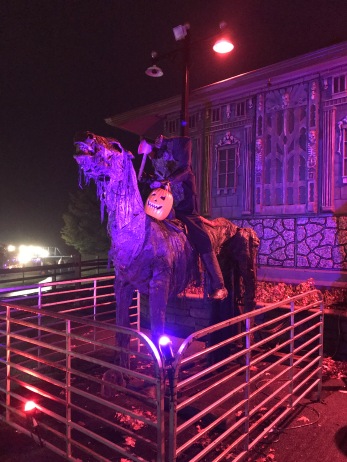 When it came time for the Haunted Forest, I was on my own. My friend had reached her limit of scares in the Haunted House. The forest was also well done but not as scary as the house. The guy with the chainsaw chasing people at the end was a highlight, people were running out of the forest! The next few hours were spent between the carnival rides, the other attractions, dinner, watching the dancers and watching the train enter and leave the station. Even the wet weather didn’t bother us, it actually added to the spooky atmosphere. 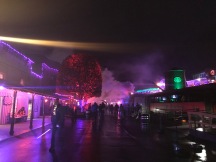 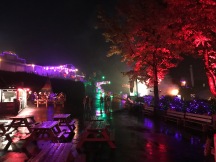 The Ghost Train itself was a fun ride. Lasting only 20 minutes, it still had an interesting story to tell. It starts with a video inside the train explaining that a chemical spill has created zombies and we need to evacuate to Area 12 on the train. As the train goes around the route it stops first for a display of an outpost scanning humans to verify if they are a zombie or not, and of course there is always one!

Then the zombies escape and we are off to the next stop. We arrive at Area 12 ready to ‘disembark’ but the zombies take over!

We set off again to be told via the video that we may have a zombie on the train and if that is case they will have to blow up the train. They scan and see we are all ok but the missiles are set off anyway. Now we see multiple fireworks heading toward the train and missing, thankfully.

During the ride we see zombies figures in the forest and when we are not entertained by the live show outside, the video is giving us more information on the scenario. Overall it is well done so as not to be just a ride through the dark at night. Each year the theme changes so it would be worth a second or third visit.

If I were here next year, I would go back again!

So there you have it, my favourite experience of Halloween for 2018. I now have plenty of ideas for my own haunted house in 2019…