Driving a car in a foreign country for the first time can be daunting, especially when you have to learn how to drive on the wrong side of the road.

In Australia we drive on the left side of the road with the driver seated on the right side of the vehicle. In the USA it is the exact opposite. What is confusing is that the gear stick and pedals are still in the same place.

It doesn’t take long to get used to driving, you may go down the wrong side once or twice but you do learn pretty quick!

One action that will take much longer to get used to is the blinker and wiper situation. Here in the USA, every time I want to turn the blinker on, the windscreen wipers turn on! No matter how many times I do this, it still keeps happening. I don’t think I will ever get used to the fact the indicators are on the opposite sides.

I have found most of the road rules are the same, however the one noticeable most confusing difference is the fact in the USA you can make a right turn on a red light as long as there is no oncoming traffic. There is not a sign to say this is ok, instead there may be a sign saying ‘no right turn’ or the symbol pictured below. This is the one rule I believe would confuse tourists, though a honk from the car behind will indicate the ability to turn right on red!

People are generally polite on the roads and will let you in if you indicate but I have also seen some crazy driving on the roads too. I have also noticed that trucks will put on their hazard lights when they are going up a hill really slowly so vehicles behind know to overtake.

Another unusual aspect is that licence plate are only required on the rear of the vehicle. On the front driers can leave it blank or place a plate for display purposes. I have seen many display plates supporting Appalachian State University here in Boone.

Getting used to Miles Per Hour is also a challenge. I covered just over 1000 miles on my road trip when I first arrived in the USA back in August and while I like to know how fast I am travelling, I am not good enough at math to convert from miles to kilometers per hour as I drive. The easy part is there are plenty of signs to tell you how fast you should be going but it is difficult to gauge how long the trip will take with out help from the internet. 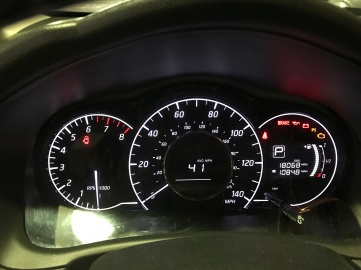 While I was on my road trip between North Carolina, South Carolina and Tennessee, I noticed that ravelling the speed limit was too slow. At 70 miles (110 kilometres) per hour I was being overtaken by everybody! It seemed as though 10 miles (16 kilometres) over the speed limit was acceptable. The motorways here are 3 lanes wide for the most part and fast, even the trucks were flying.

My hire car was a Nissan Versa, as pictured, or buzz box as I like to call it. The car was the smallest option (Economy) and just enough for me. Though when I purchased a second suitcase it was place on the back seat due to lack of room in the boot. I am renting a car over Fall Break but this time I will go up one category to the Compact range just for more comfort.

When it comes time to fill the tank, petrol in the USA is called ‘Gas’ but don’t confuse this with ‘Gas’ in Australia that is called ‘LPG’. Prices in Boone, North Carolina, where I am currently living is $2.72 usd per gallon. Compare that with the current Aussie dollar and it works out to be $3.76 per 3.78 litres, so basically $1 per 1 litre. Fuel is much cheaper in the USA compared to Australia. One main difference I have noticed is that you have to prepay for your fuel before you can pump.

On a final note, one great app for maps that I use while travelling is Maps.me, with this app you can download maps while you have internet coverage and then when you are not in range you can still use the maps offline! This app have been my saviour many a places I have travelled with or without a car. It is great to use when you are sightseeing foreign cities that don’t speak your language or for road tripping through the wilderness of the Great Smoky Mountains.

The question is not 'where have I been' but 'where haven't I been'. I can guarantee if I haven't been, it's on the list! I am an Aussie who loves to travel and I have currently been to 64 countries over 6 continents with no plans on slowing down anytime soon. I have even undertaken 2 study abroad experiences, a semester in North Carolina at Appalachian State University and two weeks in Tokyo at Seisen University. Also cruised 24 times, so far. Join me as I share my experiences, tips and reviews of all things travel and foreign. View all posts by Melanie Birch-Inwood